The PlayUp is a small speaker, though it isn’t small enough to slip into a pocket. It’s the type of thing that you would slip into a backpack and haul out in order to provide some tunes for an impromptu picnic or, more realistically, a riverside drinking session with some friends. When you put it that way, it seems like a fairly handy device – but anything that might involve a few drinks is always popular around these parts.

Did we mention that the PlayUp is actually a Nokia-branded Blueooth speaker, which has been created for the Lumia range of smartphones? No? Well, that does explain the bright colours and smooth lines for this little portable noise-maker. Ours was a bright yellow speaker and images of the unit don’t really do the eye-searing colour much justice. It’s far, far more eye-catching in real life.

The Nokia branding serves another purpose besides explaining away the visual design choices though, it also makes the supposed-to-be-mobile nature of the PlayUp speakers clear. Wherever your phone is, that’s where you’re supposed to be taking this little beauty. That’s the theory, anyway. Of course, it might also be there to confuse you into thinking that only Nokia devices are compatible. That’s not the case, the PlayUp should play nice with anything with a Bluetooth connection and a collection of MP3 files. 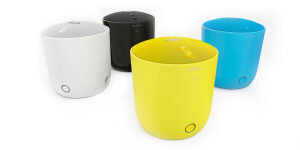 JBL’s PlayUp consists of upward-facing speakers, covered by a mesh and with volume controls gracing the top of the vaguely cone-shaped speaker unit. Directly beneath the volume rocker is a circular Bluetooth indicator and sync button, near the base of the speaker. Directly opposite the Bluetooth button is the power button, micro USB charging port and a 3.5mm input jack in case you’re attempting to run sound from something that doesn’t feature NFC and Bluetooth. Also at the base, but 90 degrees to the left of the power button, is an exhaust port for the speakers that are trapped inside their non-slip yellow cone.

The base of this speaker unit can be twisted, removing the colour-coded panel to show a 1 metre 3.5mm to 3.5mm cable that can be used with the outer port and whichever ancient technology you happen to be toting. Also below this panel is the battery, which looks to be taken directly from a Nokia smartphone. The battery is a lowly 1,430mAh affair and, while JBL claims a 10 hour battery life, that’s not continuous hours… You’re looking at three to four hours non-stop, depending on how loud you have this little speaker setup.

It’s going to chew through your battery pretty quick, though you should be able to make 10 hours of intermittent use happen if you really want to fulfil those manufacturer claims. But the battery life is of less concern to us than the speaker’s actual sound, something that we’ve neglected up till now.

The JBL PlayUp is capable of reproducing your tunes as a large enough volume to deafen any picnic crashers or, worse, beer moochers. Unfortunately it isn’t capable of reproducing all of your music. Some aspects, particularly heavy bass during our test, are lost at higher volumes. Vocals are just peachy though, those ring out clear as a bell at any volume but we were using the sounds of Freddy Mercury to make that particular observation – it might just be him, right?

A feature of this speaker cone is something that JBL calls omni-directional sound. We’re not sure just how ‘onmi’ this sound is supposed to be however, every test song we hauled out sounded far, far better from directly above the speaker than it did from a distance. The PlayUp seemed to do just what it says on the tin, launching sound directly upwards where it was diffused before reaching us. So no, not very ‘onmi’ at all. Still pretty loud, but it loses its punch quickly.

Nokia’s JBL PlayUp isn’t the best portable speaker we’ve come across, there have been better speakers from the likes of Klipsch that fulfil the portability role, with better sound reproduction, battery life and connectivity options on hand. For all that though, we’re not unimpressed with the PlayUp speakers. They could be better, however, and by most accounts the older Play 360 speaker from Nokia is a better option. If you’re up for something that matches your Lumia, and have a couple of grand to spare on a Bluetooth speaker to achieve that, the PlayUp is a decent option. But you could do better.