You are at:Home»News»Samsung Gear Solo watchphone to be revealed next month

Back in May, reports indicated that Samsung was moving ahead with plans for a smartwatch with its own SIM card – and no need for a paired phone. Now it seems likely that we’ll hear about it as soon as next month. 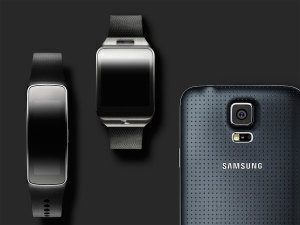 Korean newspaper The Chosun Ilbo reports that Samsung intends to unveil the Gear Solo watch at the big IFA conference in September. As speculated, the Gear Solo will not require a smartphone for communication functionality, and will be able to place calls, send texts and emails, and perform other tasks with its own SIM card, cellular radio, and service plan.

The report claims that Samsung will target outdoors and sporting enthusiasts that wish not to keep a phone handy, but remain connected to the world, and that the company hopes a lower-priced watchphone will be competitive with cheaper smartphones from rival companies.

Previously, the Wall Street Journal reported that Samsung’s planned watchphone would run on Tizen, which seems likely since the Gear 2 does as well, and the original Galaxy Gear can be updated to switch from Android to Tizen.

Just last week, patent filings from Samsung hinted at new Gear models with rounded faces and strap-mounted cameras (pictured above), the latter of which would indicate that they aren’t Android Wear devices. Perhaps one of those distinctive designs will be used to make the Gear Solo stand out from its brethren.

It appears that we’ll hear much more in a few short weeks, as Samsung already has an event planned for 3 September where it is expected to unveil the Galaxy Note 4. Don’t be surprised if the Gear Solo appears alongside it before IFA kicks off two days later.