Are you the sort of person that your less technologically-inclined relatives calls when there’s a computer emergency? You should have faked ignorance the first time, that mental association is never going to go away.

You will forever be that person who managed to fix the computer when it ran slowly (by uninstalling 57 toolbars and then deleting Internet Explorer), got a wholly dead laptop working again (turned up the brightness on the display) or magically configured a relative’s Outlook Express (entered Gmail login details and then went to make coffee).

We very often take for granted the fact that we get to play with the latest in gadgetry as it enters the market, sometimes forgetting that some people just don’t have the time or inclination to learn how some of the stuff that they carry around on a daily basis works.

Never fear though, at least in the case of LG’s new G3 Android smartphone. What follows should be enough for you to either a) fake expertise with your new handset or, more likely, b) forever convince your older uncle that you’re a smartphone wizard as well as a highly-skilled computer technician (knows how to Google really, really well).

Either way, you’ll be able to get more out of LG’s rendition of KitKat and high-end cellular hardware than you were able to before. We’ve all had that stomach-falling-into-a-pit feeling when someone else, no matter who it is, picks up our phone and starts to poke around on it. There’s nothing to see (no, really, there’s nothing special on it. Put it down!) but that feeling just won’t go away. Unless you head over to Settings, then General and then activate Guest mode. LG will walk you through it but you’ll be able to lock down your phone, open access to certain apps and give guest users their own unlock code – the effort it takes to set up is worth the piece of mind.

How to Mind Control Maybe ‘mind-control’ isn’t the right term for this but that’s always how we think of our gesture shortcuts (which can be accessed and set by going to Settings, General (again) and then heading into the Gestures sub-menu). Want to make a caller go away or just tone down the sound of your mariachi-band ringtone? Wan to feel like you’re a big-time stock trader by having the call pick up each time you put the screen against your ear (caller not included)? All this, and more, can be yours if you act now.

How to Lock and Knock 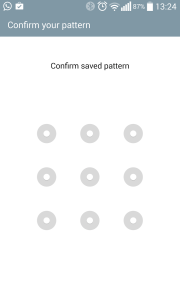 LG’s Knock On feature is so simple yet so effective that we find ourselves double-tapping other phones, tablets, microwave oven readouts… it’s that effective. But you can set your own wake-up code with Knock Code, accessible through Settings (of course), Lock Screen, Select Screen Lock and then picking the relevant option – which will require you input your own tap-to-unlock sequence. You can also activate one of those sliding pattern things if you’re less a tapper and more a slider (or have a tendency to lose count when you knock on doors).
[/one_third][one_third]

How to Tidy Up Look at this place. It’s a damned mess and it’s all… our fault, now that we come to think about it. Over time you’re going to run out of space and, even though LG’s G3 has enough space and expansion to keep you in old data for a long time to come, it’s a good idea to know how to trim some of the dead wood in a hurry. Because, reasons. Take another trip to Settings, General and then select Smart Cleaning for some housecleaning. If it’s old, unused or just a dodgy download, you’ll be able to drop it like an MTN-to-Vodacom call.

How to Quiet Time Everyone needs some time to (beep) themselves, to reflect (beep), to unwind and forget (beep) about the stresses of the day. And it’s relatively (beep) easy to get that, provided (beep) that SOMEONE TURNS THEIR PHONE OFF! Ahem. If you’re planning on leaving work behind for the evening, head to Settings, then Sound and Quiet Mode. Decide what is important enough to interrupt your mantra, mute the rest and then decide what time of the day will be your period of zen and peace. Forget Facebook for a while. You may notice that this image is a repeat of the Windows function above. That’s because these screenshots were all taken with QMemo and it’s about as easy to capture an image of QMemo using QMemo as it is to feed Schrodinger’s cat. But, if you want to quickly access QMemo, to capture a screen or just have something to scribble on with your finger, holding down the Menu button at the base of the phone and then sliding your finger upwards will give you the menu needed. Just highlight QMemo and release but don’t forget to save.
[/one_third][one_third_last]

How to Inset Your Apps

Android is awesome and all but sometimes you just get a hankering for a window. The kind of window that can be dragged and then unintentionally closed because you hit the screen wrong. We don’t know why you’d want to go this old-school with a smartphone but we’re sure you have your reasons. Weirdo. All of the apps that support making windows that can be manipulated on your mobile desktop can be found under QSlide, which is found in the drop-down menu from the top of the phone. An app would be faster and neater though… just sayin’. 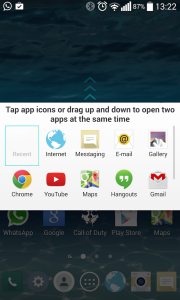 Want to do something a bit different? A little dirty? Something you might be ashamed of later? Try running two apps at once, on the same screen. There is a limit to which applications can be run at the same time but getting the option is surprisingly simple. Just hold down the Back key until you see an option to drag two apps in place. Perhaps you need to look up real directions using Google Maps while a family member on Hangouts tries to get you lost again. The G3 should get you there in one piece.

How to Gesture at Yourself Come on, this one must be easy. We gesture at people in traffic all the time! Er… anyway, if you’re a selfishly (or selflessly) self-confessed, selfie-fantatic, there’s a gesture just for you. No, not that one. Lift your palm in front of the front camera, close your hand once you see a box appear onscreen around your hand and you’ll start a selfie-timer, letting you get in position before the Twitter/Instagram snap is taken. Shot composition is entirely up to you but if you’re going for Instagram, some food in the background may be a plan.
[/one_third_last]