We’ve seen some interestingly-shaped wireless room speakers in the past but the design that has been selected for Harman Kardon’s Aura – which looks like a fishbowl that has been attached to a jet-engine intake or a 1950s rendition of a flying car sans passengers – has to take the award for the most unusual design to enter Stuff Towers.

Don’t go thinking that this strangely stylish speaker is all looks. As fragile as it appears, and we certainly wouldn’t want to drop it on a tiled floor, it is home to a surprisingly forceful 2.1 speaker setup capable of filling an entire room as well as the surrounding areas with noise.

The clear section of the Aura, with its lovely little light nestled in the centre below the tube, has something to do with how it appears to amplify sound to the extent that it does. Exactly how it does so is something we’re not going to be drawn on, we’re not sound engineers after all, but it works. Without cranking the Aura up to full bore, the sound output is loud and clear enough to be hear a considerable distance away – as in outside, on a lower floor in a high wind. Stuff‘s neighbours may hate us for this observation.

The majority of credit for this sound goes to the 15W left and right channels, made up of six 1.5-inch drivers, and the single 4.5-inch down-firing subwoofer that has a 30W output. HK’s little speaker setup doesn’t seem like much until you actually experience it in action, where it will rattle items on tabletops across the room. The Aura can’t quite replicate a heavy bass kick to the full, thumping extent we would like but we’re acting greedy here. It’s compact enough to fit on most surfaces but the crisp sound reproduction in most cases has led us to want even more from a speaker this size. 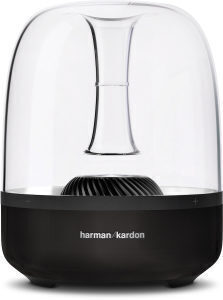 What does this vase-like speaker have to do to get your attention and approval, besides looking the way it does? It is definitely trying to appeal to everyone, with Bluetooth and Airplay being supported for basically every mobile device from the major camps. In terms of wired connections, you can make use of the 3.5mm Aux input jack or an optical connection and there’s also a DLNA-supporting WiFi connection available.

In short, it’ll play anything from anything. How to control your tunes becomes an issue next, with the controls on the Aura being almost hidden. Volume can be adjusted on the Aura by looking at the strip dividing the speaker base from the glass dome. If you’re running your fingers along that strip, you’ll turn up or drop the volume when you hit the section that has a series of raised bumps. This could have been made more visible but we’re not going to hold it against the speaker.

Volume can also be controlled by downloading Harman Kardon’s app, which is used in lieu of a physical remote. The lack of an included controller is a slight wrench but the app will take its place. Just don’t expect too much control from the app, you’ll be able to stream your tunes and control the volume and bass levels – that’s about it. It’s simple but it works.

It may not be the biggest or loudest speaker you’re ever going to see but it’s one of the most unusual-looking. The Aura also packs a sonic punch that you’re not expecting, considering its diminutive size. There are a couple of things that Harman could have done better, like improving their remote control app and actually including a physical remote, but most of our time with this connection-festooned speaker system was pleasant, if noisy. We just don’t ever want to drop this thing.