It used to be thought that diamond was the hardest thing on Earth. Then scientists discovered that Chuck Norris was harder. Well it’s time for Chuck to step down – because the new Merc S600 is tougher still.

The S600 Guard is based on the standard S600 – meaning drivers gets a hefty 525bhp underfoot thanks to the massive V12 engine under the bonnet.

But what sets this weapons-grade limousine apart from anything else in the Mercedes line-up is the protective steel that’s been lavished on the exterior to ensure bullets don’t disturb the peace inside. There’s even polycarbonate-coated glass on the windows with added ‘splinter’ protection should the unthinkable happen.

Mercedes claims that this is the first vehicle in Germany to be offered with the highest class of ballistic protection (VR9), which we are assured can withstand rifle fire from military weapons and protection from grenades and explosive charges. Not that we’re ever likely to need it ourselves. 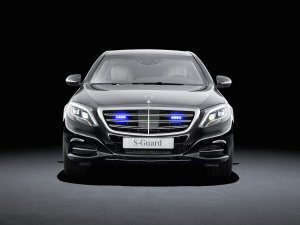 But suspend your disbelief for a second and imagine you are rich and famous: you’ve just enjoyed a bottle of Cristal at your local nightclub, you hop in your S 600 Guard and some miscreant lobs a grenade under the vehicle. What happens next?

Well, the run-flat tyres will kick in should the explosion puncture the rubber, meaning at least 30 kilometres worth of travel, which is more than enough to flee the scene. A panic alarm system can be activated from the rear, which alerts the driver to your current state of sheer terror, an automatic fire extinguisher quells any flames in the cabin, while an emergency fresh air supply protects occupants from the ingress of noxious fumes.

There’s even a special cooling compartment between the two rear seats so you can crack open a nice cool beer once the ordeal is over.

And because this is a Mercedes S-Class underneath the armour plating, it contains such niceties as a luxurious First-Class rear suite for business meetings on the move, a Warmth Comfort package that heats any surface an occupant can touch and LED interior lighting throughout.

There’s no word on price at the moment but if you’re the sort of person to need ballistic protection, you’re probably not too worried about spending massive sums on a new set of wheels.