This is Netgear’s Nighthawk AC1900 R700 Smart WiFi Router. That’s a pretty unwieldy name, so we’re glad that the company actually added the ‘Nighthawk’ in there because that’s what we’ve been calling it ever since we saw the full title – even if it does sound like a French Resistance call-sign from World War II (and its subsequent humorous sitcoms).

It kind of looks like a Nighthawk though, all angular and speedy and like it hunts vermin in your home while you’re sleeping. While in flight. Okay, perhaps not the flight bit but it’s got a touch of Italian supercar to its design that should go well with a high-spec gaming PC and a collection of consoles. It doesn’t hurt that the front of the router lights up like a space shuttle console when it’s powered on either.

If you’re sitting with an existing network setup, you will know how reluctant you can be to slot something new into it. Especially if, like our gaming setup, you had some significant issues getting everything to play nice the first time around. The Nighthawk shouldn’t give you any problems there, as you’ll be greeted with a setup wizard that you can access through a web browser and the pre-set account name and password. Just input your ISP details, rename your network with the same name and password that was previously used and everything will just reconnect once you’re finished with this simple task. Very fire-and-forget, is the Nighthawk, though you’ll need to add another password for the 5GHz band if you didn’t have one previously. Minor effort all round. 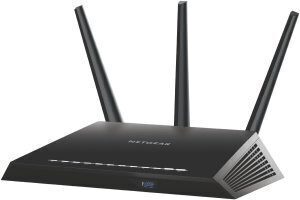 The R7000 Nighthawk (there is another, R8000 model out there) is targeted at the gaming market, hence the impressive good looks. But that’s not all that is being directed at the gaming bullseye, Xbox 360 and Xbox One users will find themselves automatically given priority on the Nighthawk so that you can get your game on without having to worry about home-related lag-spikes. Anything that Telkom or your ISP happen to throw in your direction is another story entirely.

The Nighthawk features something called Turbo QAM, tech from Netgear that improves the speed of the router’s 2.4GHz band up to 600Mbps. Add that to the 5GHz band’s top speed of 1300Mbps and you’ve got the AC1900 portion of Netgear’s naming convention explained. To get that sort of speed though, you’re going to need a device that supports the 802.11ac standard and those are in fairly short supply for the moment. Obviously your internet speed is going to be capped by your line but inside your home, streaming media to just about any room in the house is a dream. The Nighthawk uses Beamforming +, which will direct signal towards devices in use throughout your home and actually improved our media streaming through a couple of walls, whether it was to an Xbox 360 from a PC using a wireless connection or to a tablet (also using a wireless connection).

You can have several devices connected wirelessly, with your internet performance being the bottleneck when going online, but there’s also space at the rear of the router for up to four wired connections. A fifth Ethernet port is used to connect your modem for distribution to the rest of the home and there are two USB ports (one of which is USB 3.0) to play with as well. Plug in a backup USB hard drive for some networked media.

Are you going to be able to take full advantage of the speed that the R7000 Nighthawk brings to the table? Based on our infrastructure and the average wireless standard of the South African home, the answer is ‘no’. But that shouldn’t deter you if you’re looking to get your game on (especially with Microsoft’s consoles) or if you’re going to be streaming media in the home. We definitely noticed an improvement with both locally stored media and with streaming options, thanks to Netgear’s WMM quality-of-service (QOS) setting. Look at it as future-proofing and a grand addition to your gaming setup.