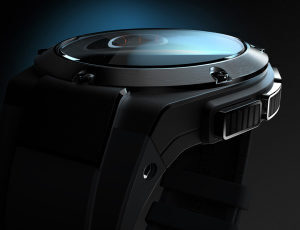 Everybody wants to make a smartwatch and it’s only a matter of time before those that don’t have one join the likes of Pebble, LG, Samsung, Motorola and whoever else Google can muster in creating one (we’re looking at you, Apple).

The newest entry in the I-have-a-smartwatch race is Hewlett-Packard, who are taking a far more expensive approach to the wearables trend by creating a luxury device as opposed to something that will cost less than a smartphone.

The smartwatch, which is apparently going to be exclusive to an online retailer called Gilt, has been designed by American Michael Bastian. Though the name sounds a bit too close to ‘Michael Bay’ for our tastes, the image of the device seen on the online outlet’s website looks stylish enough to compliment that luxury German vehicle you’ve always wanted.

Specs are thin on the ground, as in there aren’t any available yet, but HP will likely go for a solution that is compatible with the widest range of high-end smartphones. It should feature notifications and media control at the very least.

As for the price, that’s also unknown but think about how much your average luxury watch costs before asking what this one will set you back. Looks good though.