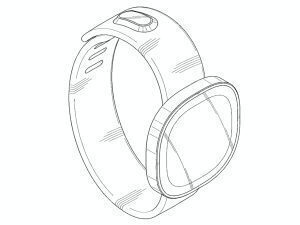 Not content to have both the Gear Live and Gear 2 smartwatches on the market, Samsung may be pursuing a couple of models with rounded screens, as well, if uncovered patent filings bear fruit.

Multiple designs are shown, including one with a perfectly circular face and another with a slightly more square-like shape, but both depict a camera and charging pins on the wristband.

Because Android Wear doesn’t support watch camera use (at least thus far), it’s likely that these designs aren’t meant for Google’s operating system, but rather Samsung’s own Tizen, which powers the Gear 2 but is still a ways off from being a proper phone OS.
Samsung’s rounded smartwatch

MobileGeeks (via Android Central) claims that the camera is part of a gesture system of some sort, which had been previously hinted at in other patent filings, but has yet to be detailed out. These applications were filed in the United States in March 2013, but the design patents were only just awarded yesterday.

If there was any doubt that Samsung intends to keep pushing ahead with wearables, surely these filings will convince you otherwise. What remains unclear is how quickly the company will push out a new product considering the newness of its recent efforts.