Oh fitness gear, why do you torment us so? Why can’t we just wallow in our torpor without having something telling us just how lazy we’re being, like bosses and exercise bands are wont to do? But we made the sacrifice and got away from our notebook, game console, computer and couch for long enough to give Garmin’s vivofit a nice, lengthy test. Now, if you’ll excuse us, it’s time for us to have a lie down.

Day One – Strapping on the vivofit, we’re feeling more energetic already. This feeling won’t last. First order of business, get the vivofit connected to something so we can register it and get started. The USB ANT Stick is our first port of call but the vivofit is stuck in sync mode for some reason and refuses to connect to our MacBook. Exercise is on hold until we’ve update an LG G2 to Android 4.4.2 so we can get everything working.

Day One: Later – Android update done, the vivofit connects and syncs without a hitch. Not sure why it gave the MacBook hell but it’s a problem others have experienced. The new connection seems to have fixed whatever the bug was. Too bad it got working just in time for us to complete the setup using a web browser (where most of the settings and objectives can be changed) before going to bed.

Day Two – The data has started rolling in. Steps taken, steps remaining, calories burned and distance walked/run are all displayed on the vivofit wristband’s screen. That is assuming you’re not trying to look at it in direct sunlight or in near darkness, the readout is indiscernible in either instance. Still, you hardly need to resort the the app at all as there’s also the time of day, date and heart rate info available on your wrist. No smartwatch-like notifications though.

Day Three – The included manual, as well as the online PDF manual, is basically useless. We’ve learned far, far more about the vivofit’s basic functions by surfing the Garmin user forums and just messing with the band and app, neither of which are all that intuitive. Sleep mode has been discovered – too bad it needs to be manually activated and deactivated in the morning. For those who are interested, hold down the sync button for four seconds to start sleep mode.

Day Five – We’re finally going to brave the heart rate monitor. The adjustable strap goes around your chest with the sensor centred over your solar plexus. Feels a lot like wearing a belt waaay too high up. Sync problems have reared their heads again, this time between the vivofit band and the monitor. Off to the user forums again, where a solution is quick in presenting itself. Garmin should get these guys to write the manual next time.

Day Six – Time to actually run with all of the gear on. So far, it hasn’t really prompted us to move a whole lot more than was previously the case. The vivofit silently chastises sluggish users with a red band that creeps longer across the display the longer you’re immobile. No vibration or sound, or even an app notification. So we only feel bad if we look at. We could just not look at it but that defeats the point.

Day Six: Later – We have good news and bad news. The good news: Garmin’s heart-rate monitor is fairly accurate, whether you’re resting or setting a pace on the road. The bad news: our heart doesn’t perform quite as well – does Garmin make replacements? The band slips a little but that’s an adjustment issue.

Day Thirteen – It’s been happening for a while now. We’re moving further and faster, just to meet and beat Garmin’s automatically configured targets. Since the whole Stuff team is chain to their PCs for deadline time, these are mercifully low. We’ve secured several badges, for hitting milestones, and even won an online challenge against strangers on the internet. The whole not-having-to-charge-it thing is a blessing, Garmin claims a full year on a battery but we haven’t had it that long. No other sync hitches so far, except when Garmin’s main servers are down and that’s just temporary.

As fitness bands go, we actually prefer FitBit’s Flex, which is simpler to use and has a far more impressive app (see right). If only the Flex had the vivofit’s battery life. The vivofit is comfortable, easy enough to use after a few false starts and is actually able to motivate you to exercise in its own low-key way. The heart rate monitor only comes out during intensive workouts, it’s too uncomfortable to use all the time and we don’t really want to know what our heart is up to while drinking coffee at 2AM. This band is a good option if you’re just looking for general stats and tracking but if you’re a serious runner, the Forerunner lineup may be more your métier. [/two_third][one_third_last]The App

Garmin’s app could be a bit better designed. Often while using it we’d accidentally exit the application instead of just going back a screen. This is easily fixed though, just disregard your phone’s ‘Back’ button and stick to the app interface. Usually. 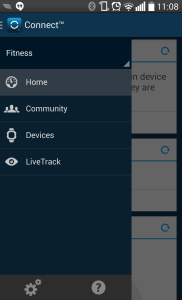 Here’s where you can access whichever sections you’ve personalised for the app. Home is where all your widgets will sit, everything from steps and goals to sleep tracking to badges for hitting milestones and winning challenges. Community is where you sign up for challenges, see news and other connected users on your profile. Devices… speaks for itself and LiveTrack is where you can upload data for a run or exercise to other users in real-time. This is a view of the Steps widget at the end of a day. Garmin’s readout will confirm what the band has already told you, you’ve either made (or failed) your daily goal while the chart at the bottom tells you when you were most active. The sleep-tracking widget, the morning after a typical long-ish Stuff rest period. Users set how they feel upon waking while the chart at the bottom tells you just how restless you were at night. It also identifies that we woke up and forgot to disable sleep mode for quite a while. If you forget to set the band to track your sleep, where is where you’d input the times manually – the vivofit remembers what you did last night.[/one_third_last]