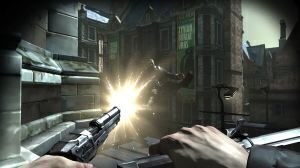 It’s time for Microsoft to reveal which games they will be giving away three of charge to Xbox Live Gold subscribers for the upcoming month and the company’s offerings are getting better each month.

First up for the month of August is Arcade title Motocross Madness, from Bongfish and Microsoft. Motocross Madness is a reimagining of the original Microsoft title which takes players to a series of rather exotic locations where they can race, trick or just much around in the game world, while there are also some impressive online game modes. Normally it’ll set players back R110 but from 1 August to 15 August it’ll be free to Gold subscribers.

Following the bouncing bike title is Bethesda Softworks and Arkane Studios’ supernatural first-person stealth (or not) assassin title Dishonored. Players take on the role of a disgraced bodyguard roaming a steampunk-ish version of London that is afflicted by a bunch of nasty overlords and a very unpleasant plague. It’ll generally cost players R200 but Gold members will be able to grab it free-of-charge from 16 August to 31 August.

Keep your eyes peeled for the corresponding PSN details and hit up Xbox Live in the meantime to grab the splendid BattleBlock Theatre before the end of July.