You are at:Home»News»Samsung’s Gear VR headset could let you switch between virtual and reality 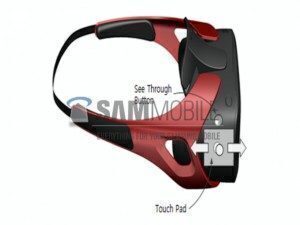 Samsung has partnered with Oculus VR for a phone-centric VR headset named Gear VR, but we already knew that. What’s new is that this device will most likely feature capabilities that include letting you switch between virtual reality and, er, real reality.

SamMobile claims it’s got its hands on a pre-release version of the Gear VR manager (the software), and has revealed some of the functionality that it’ll possess, alongside specifying how it’ll work.

Apparently, the head-mounted display will let you attach only Samsung Galaxy smartphones to the Gear VR device – other manufacturers’ phones won’t be compatible. It’s also said to plug into virtual reality via USB 3.0 – which is only available on the Galaxy range, so we presume the above could have some truth to it.

SamMobile also says the headset will feature a back button that doubles up as a pass-through switch (read: lets you flicker between virtual and reality) and a touchpad on its surface because you won’t be able to access them on your mounted smartphone.

Other leaks have led us to believe the Gear VR will come with some sort of movie viewing option, in addition allowing the wearer to view any panoramic pictures taken with its companion device. It seems that upon installation the VR software will automatically download the “VR Panorama” and “VR Cinema” apps.

In addition, it might also allow you to speak commands to your device and if you’ve remained in your fake world for more than an hour, it nudges you with a reminder – it doesn’t want you getting too lost in your own version of Total Recall.