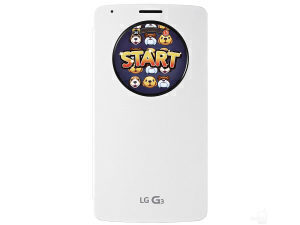 Called Puppy Pop, it’s designed so that you can play it through the QuickCircle case’s round window. It’s a “match-three puzzle” game, where players accumulate points by drawing lines through three or more identical puppies, removing as many from the board as possible before time runs out.

Scores can then be shared on your social network platform of choice, if you want to profoundly irritate everyone in your Friends list. And admit to playing a game called “Puppy Pop“.

Users of the case are already able to check the time, place calls and take photos without opening it. LG is clearly hoping that other developers will develop apps and games for the QuickCircle case; it’s made the SDK for the case publicly available.

Puppy Pop will be free to download from the Google Play Store as of yesterday, though it’s not available in the South African version of the store just yet. You can read our review of the LG G3 here (link).