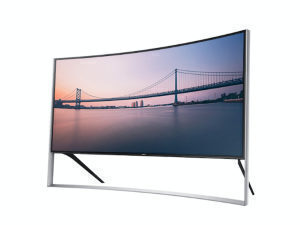 Yikes. Samsung has finally put a price on their monster 105-inch 4K curved OLED TV screen and it’s a big one. The price, we mean. The screen size goes without saying.

Laying hands on the UN105S9W from Samsung, which has not yet being priced specifically for South Africa, will set you back to the tune of $120,000. That’d be about R1.27 million in local dosh, which is a whole lot of cash for single piece of your home theatre setup, 4K screen or not.

Samsung seems to be aware that the 105-incher isn’t going to see the demand that their less insanely-priced sets have enjoyed so they’re going to be skipping mass production of these TVs. Instead, each 4K unit will be made to order.

But wait, there’s more! Samsung will also be providing something called the Samsung Elite Service to customers willing to pay for it. That would mean that Samsung will send someone to your home to help you set up and learn the features of this gigantic 4K screen. Hey, if you’re already dropping over a million bucks on a TV, what’s a little extra for some personal service?

As usual, we’ll keep you posted if something regarding Samsung’s 105-inch 4K beast happens on the local front.