Renders of a Sony Xperia Z Ultra successor have leaked online, and it’s a spec fiend’s dream. Assuming it’s real, that is. 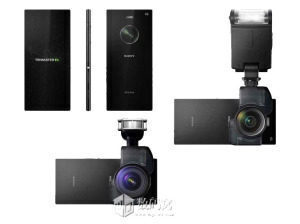 The Xperia Z3X, as it will reportedly be called, has a gigantic 22MP sensor on its rear, at least according to the source on Chinese site digi-wo.

The Xperia Z3X is also said to be powered by Qualcomm’s 64-bit Snapdragon 810 processor, which will rest beneath the Z3X’s 7.9mm-thin shell. Considering that Snapdragon 805 chips have yet to make their way into mainstream phones, we’re more than a little skeptical however.

And our skepticism isn’t helped by the huge, outlandish camera accessories either, which appear to include a full-size external flash that wouldn’t look out of place hugging a DSLR.

It wouldn’t be the first time Sony’s thrown an imaging surprise our way (remember the wireless QX10 lens?) – but we still think that this is a little too far fetched.

Still, the renders and specs are out there, and while we’re swallowing it all with near-lethal levels of salt, we can only wait and see. Stay tuned.