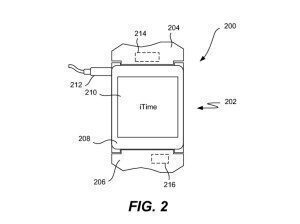 An Apple patent has revealed details of a smartwatch device dubbed ‘iTime’.

The patent is the clearest indication yet that Apple’s working on a wearable device to rival the likes of the Moto 360 and Samsung Gear 2. Apple’s patent application – filed in 2011 and unearthed by Apple Insider – describes two variants of a “wrist-worn electronic device”.

The first version resembles a sixth-generation iPod nano; a dockable module that can be clipped into a strap, turning it into a smartwatch. Interestingly, the illustrations of this device refer to it as “iTime” – though Apple has already filed for “iWatch” trademarks.

The device’s strap could contain sensors – such as accelerometers and GPS – and haptic feedback devices systems. Other electronics packed into the strap could include Bluetooth and, interestingly, a near-field antenna – is Apple finally ready to get aboard the NFC bandwagon?

The second version of the device is a more conventional watch-style device, with a curved glass screen and an integrated strap.

Apple’s patent also describes ways in which the iTime device could function as part of a “personal wireless environment,” communicating with an iPhone. The example cited will be familiar to anyone who’s used Android Wear; an incoming e-mail triggers a notification, with the option to interact with it using the iPhone or iTime device.

Apple’s expected to announce a smartwatch this year – although the usually-reliable KGI Securities analyst Ming-Chi Kuo claims that production of the device has been delayed due to the challenges of working with the new materials involved in its production. Only iTime will tell.