MiP – Our robot pal is a bit unbalanced

We really do get some of the most interesting stuff to hit South Africa through our portals on a regular basis. Like this little robotic friend, known to most as the MiP. MiP is an app-controlled robot of sorts, though he’s more of a high-tech toy than something that you can program and mess around with on an internal level. But he’s cute, (or annoying depending on how long kids are going to be playing with it) which is nice.

MiP is a self-contained little robot that is sustained by four AAA batteries that are inserted into its back. On its own, it’s fairly limited but there are still a variety of modes that you can experience. Add the smartphone app into the mix and you’ll be able to control the little wheeled humanoid in much the same manner you would a drone. Except it doesn’t fly. Or have a camera.

MiP is constructed from sturdy plastic, which is splendid because it’s going to take a few knocks as you’re getting used to ordering it around. At first glance it seems a bit top-heavy and just how it plans to stand and move on its own will seem like a mystery until you actually power it on and set it down. It just rocks back and forth for a moment before becoming ambulatory, wandering off to do whatever it is programmed to do. 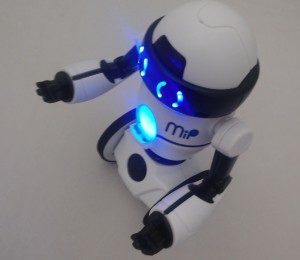 There are a few things that MiP can do on its own without direct human input and these are denoted by a little light in the blighter’s chest. Setting it to Roam sends it off on its own little mission, with eye sensors keeping it clear of most ground-based obstacles. Things at a little over eye height, which the Stuff offices are littered with (don’t ask), can prove a bit more problematic.

It’s also able to play an avoidance game, where it will turn away from wherever you’ve placed your hands – in front of the sensor, of course – and it has a couple of balancing tricks that can be performed with an attachable tray. MiP can also be programmed with a series of gestures, which turn into a collection of movements when the user claps their hands twice. So far, so simple.

Each of these settings can be selected by spinning one of its wheels while it is in the air. Each turn will change the colour of the light in MiP’s chest so you know when activity has been selected. The last thing you need is for it to become sentient and wander off because you weren’t paying attention.

Add in the app and a few other functions become available. You can drive the MiP using a smartphone and either dual or single joystick controls – a lot like an AR.drone though unfortunately MiP doesn’t come fitted with a camera for proper remote control. Select a song from a smartphone playlist and you can set the little robot to dance, which works about as well as a gadget with no legs can manage. Still entertaining though, in its own way. Finally, if you have two or more robots on hand, they can battle in a couple of basic AR games that end when the loser falls to the floor. We were unable to test this last item since we only had one MiP terrorising the office.

But MiP is limited, in several ways. The really tech-savvy will find themselves bored with MiP’s skills after a short while and, unless there are a few more tasks and abilities introduced via a software update in future, that probably won’t change. The kids will probably love him/her/it though but be sure to turn the sound down. MiP features a personality that is conveyed through some cutesy but possibly very annoying vocalisations and it loves to talk.

There’s also battery life to consider. MiP will chew through the four AAA’s in short order so hopefully you’ve got a couple of sets of rechargeables handy. Then there’s the app. There’s little wrong with the smartphone control itself, aside from being a bit simplistic, but you will need either an iPhone or one of a very specific and limited set of Android devices in order to use it. One of Samsung’s Galaxy flagships or the newer Notes will do but don’t expect to be controlling MiP with an LG at present.

It also doesn’t like rough surfaces much, a limitation of its design. Well-laid tile or carpet is MiP’s best friend but irregular ground will see it toppling over dead at frequent intervals and that’s not a whole lot of fun.

MiP is hard to quantify, since we don’t often see its like but a small, semi-autonomous robot could stave off those Star Wars cravings for a little while. Or bring them on. It works well enough, provided you’re not taking it outside, and there’s enough to do with it to keep you busy for a few hours. But eventually the younger set will get hold of it, when you’re not showing it off to people who haven’t seen it, and it’ll mysteriously go missing from your pile of gadgetry. Which might be the best thing that can happen to it – at least poor MiP will get some more attention.