It’s not every day that a detective is thrown out of a window, pumped full of bullets and is then still expected to get up and go searching for his killer but that’s the premise of Murdered: Soul Suspect. The whole idea is that there’s a serial killer on the loose and the player is tasked with bringing them to justice for a couple of reasons: the whole ‘ending the crimewave’ threat is one but you’re also trying to finish up lead protagonist Ronan’s unfinished business so he can move on. Oh yeah, you’re a ghost during the length of the game.

The storyline, which revolves around Detective Ronan O’Connor, a young girl searching for her mother named Joy Foster and the serial killer who is terrorising the town of Salem (where they burned witches, way, way back in the day), is certainly the best part of Soul Suspect. As such, we’re not going to be spoiling anything further here, there won’t be any narrative elements mentioned from here on out. Players will be using their ghostly form to get to places that human investigators just can’t and conducting their own investigation into the murders that have been taking place – including their own. To do this will take a bit of brainwork. As a ghost, players can wander through walls and doors unless a building has been consecrated or sanctified – a convenient excuse for the developers to create the odd corridor that holds players in place. On reaching a crime scene, a couple of ghostly abilities (which are learned throughout play) and the good old-fashioned Mark One Eyeball will allow players to reconstruct the crime and see where their deductions will take them. On occasion, players will have to rely on some living human assistance but they’ll have the option to possess NPCs, reading their minds, jarring their memories or just listening in a little closer to certain conversations. There’s also the option to teleport while not wearing someone else’s meat suit, hide in clouds of ghostly mist and perform the odd spot of poltergeist shenanigans. Mostly in the name of gameplay, that is.

As mentioned, the storyline is Soul Suspect‘s strong suit but it’s not enough to save this game on its own. There’s little challenge to be had and almost every investigation can be completed through guesswork, even if the frustration of hunting for clues gets too much and you don’t locate all of them. There’s a combat mechanic in place, which sees Ronan facing demons out to drag him… somewhere. Where isn’t explained, it’s all rather nebulous. But each confrontation is exactly the same: hide somewhere, sneak up on demon, banish it with a quick-time event (QTE). If it spots you, you either hide until it resets or die. Not exactly exciting and the challenge doesn’t increase at later stages, Murdered just throws an extra demon or two at a time at players. 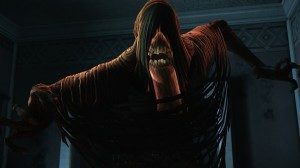 Later in the game, exiting an area will see these boring demon encounters become mandatory. If you need to leave, they will be there. This wouldn’t be so bad to deal with but unfortunately this lack of excitement translates through to the investigations as well once the novelty wears off, with only the cut-scene events providing a bit of a spark.

Murdered: Soul Suspect is also short. It’s perfectly possible to blow through the game in a single sitting, assuming you’re not being sidetracked by collectible items but this also assumes you’re completing the side-quests for other errant lost souls. The game is artificially lengthened by the arrival of demons, who cannot be simply outrun, and by the construction of the world. You’re going to have to side-track around obstacles for no reason other than to add a few minutes to the running time. That’s just poor form on the developer’s part.

And it’s prone to glitching, though not so badly that progress needs to be resumed. This review was completed with an objective, long since completed, still cropping up from time to time for no reason other than the game hiccuped at that particular time.

Lastly, there’s the whole ‘replayability’ thing. Or rather, there isn’t. Soul Suspect has absolutely zero replay value. Restarting the game will have the same events and objects in the same locations as they were the last time around. You’ll have seen it all before and will know just how boring the road ahead is going to become…

So we’ve got a decent story hampered by stunted gameplay and a short experience, with little hope of players coming back to it afterwards unless they’re completionists. Who should be playing this? Well, anyone who is keen on detective stories or the odd bit of history – especially as it applies to Salem’s past – will get through Murdered: Soul Suspect without too much frustration. For everyone else – keep it in mind for a bargain bin buy, there’s not enough to make you want it right now.