Wait, HiSense has a smartphone? Yes, HiSense has a few smartphones actually but this is the first physical specimen to cross the threshold at Stuff Towers. And, on the face of it, HiSense has a pretty decent phone in the Pure 1 though it wallows in the dust left by the major manufacturers. That’s fine though, the company isn’t known for its cellular tech but they’re making strides. 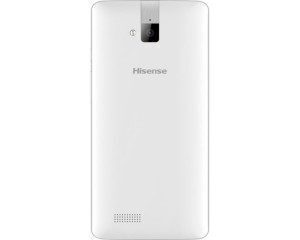 The Pure 1 could be mistaken, at a distance, for something out of LG’s stable what with the 5.5-inch display that it packs and the overall shape. Come a little closer though and you’ll see that HiSense hasn’t included an HD display, though there’s still a respectable 1,280 x 720 screen for you to play with. The silver edging at the top and bottom of the glass is also outside of what LG is usually doing these days but there’s still a fair amount of similarity to be seen.

A peek at the rear, where the camera lives, also has some common points though LG’s back buttons have not been replicated. The relatively simple design has. There’s enough to make HiSense’s phone come across like its own piece of work on both sides – there are only so many ways you can modify a glass-fronted rectangle, after all. The engineering is solid, literally. You’re probably not going to want to drop it but it doesn’t seem flimsy at all.

Skip on over to the interior of HiSense’s device and the differences crop up thick and fast. Though it has the stylings of a high-end device, and for HiSense it is just that, it doesn’t have the inner workings to compete with the S 5, G2 or G3 which it is trying to emulate. There’s a 1.3GHz quad-core processor sitting inside the Pure 1, chugging along with 1GB of RAM and 8GB of storage out of the box. Not quite in the same league as the Snapdragon-wielding superphones then, even if it wants to look like it is.

Performance on the Android 4.2 OS is adequate. We’re probably a little spoiled by the constant procession of the best and brightest smartphones in existence through our sweaty hands here but the Pure 1 won’t let you down while running most tasks. You won’t be able to do as much at once as you would with something higher-spec but it costs under a third of what you’ll pay for a Galaxy S 5. It performs many things, at this price miracles isn’t one of them.

The dual-SIM Pure 1 isn’t quite what we expected on the software front. The review unit we used had cheaper-looking icons than we’re used to, as well as a couple of apps that were titled with Chinese characters. There’s the usual run of Android software on the phone, without nearly as much additional fluff that we see from the likes of Samsung. Using the collection of software itself does demonstrate some small hitches at times but there’s nothing that’s going to ruin your day or even inconvenience you mildly.

What else are you getting with the Pure 1? The only other feature of note is the camera setup, neither of which is all that remarkable. The 2MP front-facer is going to be enough to make others look up your nostrils during video chats while the 8MP rear shooter is about what you’d expect from a phone camera. It takes images. No more, no less. They’re decent enough if you have the right lighting but there’s no special camera tech to look forward to. We’ll leave that to Sony, Nokia and HTC.

So why should you consider the Pure 1 as a mobile device? Several reasons, especially in the South African market. Dual SIM functionality means you can conduct private and business calls from the same device, the specs come in at the mid-range and the screen is better than you’d expect for the R3000 asking price. Then there’s the design itself, which is just begging to have a Snapdragon and some extra RAM dropped in to make the Pure 1 a proper contender. It’s not going to rock your world as is but then, it’s not going to rock your wallet either.