What’s thinner than an iPad Air, weighs less than the same, is able to withstand the elements and has a glossy, stylish finish? Many things, actually, including some antique pocket mirrors but we’re not that interested in reviewing those here at Stuff. No, what we’re describing is Sony’s Xperia Z2 Tablet, which has finally made its way to our temporary home for the latest and greatest in new technology. 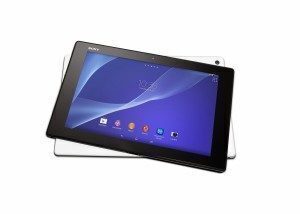 And, this time around, Sony’s Xperia Z2 Tablet has a decent crack at the title of best-looking Android-based tablet. Its all-weather capabilities are not to be overlooked either but Sony has waterproofed one of the most compact and stylish 10.1-inch tabs we’ve ever seen. It shouldn’t be surprising that the Z2 Tablet looks a whole lot like its immediate predecessor but it’s thinner, lighter and altogether sleeker all round.

Hauling the Z2 Tab out of the box, our first impression was one of lightness – to the point that we were passing it around on the office and wondering where Sony put the rest of the tablet. But it’s all there, weighing in at a mere 439 grams (shaving 30 grams off the weight of the iPad Air in the process) and with a maximum thickness of 6.4mm that will make even Huawei’s Ascend P7 smartphone look slightly chunky. We might as well call this thing the Android Air.

Despite all of the slimming down, Sony haven’t neglected the specs and that’s where they’ve got our attention, because there doesn’t seem to be space for any of it in here. Yet somehow they’ve whittled down a 2.3GHz Snapdragon 801 quad-core chip and stuck it inside the Z2 Tablet with 3GB of system memory and 16GB of native storage. There’s support for another 64GB if you have a speedy microSD lying around. For a tablet, this is a lot of raw power packed into a very small space and it shows in the performance. Multiple apps running at the same time barely register on the Z2 Tablet, making multitasking a very pleasant experience.

Sony have done their usual bang-up job on the display as well. We’ve seen 10.1-inch HD displays with higher pixel density but the Triluminos and X-Reality tech that Sony is prone to sticking in their slates makes up for that. If you’re going to be using a tablet as a media consumption device and can’t get enough HD then you’re going to fall in love with the Z2 Tablet’s screen. Bright, clear and colourful when it needs to be, this is the one thing you need handy on those long trips – preferably not while you’re operating heavy machinery, that is.

Android KitKat is doing all of the software work with Sony’s collection of parts and, wonder of wonders, they haven’t modified it much at all. There’s a couple of Sony-specific media apps that have been added but users will find themselves having an almost vanilla experience for the most part. The run of apps is standard then, so customisation is the order of the day. Whether that’s a good thing is up to you, just know that there’s not any compelling app-based reason to get your hands on the Z2 Tablet.

Instead your reasoning is going to be that the Z2 Tablet is waterproof, as are most of the Xperia devices to issue forth of late, it has a brilliant collection of hardware with a fantastic display. If there is a media tablet in your future, it should probably be this one. If you’re more work oriented, then there are other, cheaper options available that perform just as well. Obviously if you favour Apple’s range of devices then you’re going to swing due iPad Air but if you’re looking at an Android tab, this is one of the best but only for the moment. We’re expecting it to be outclassed soon enough. The only real point of contention might be the price, which nobody at Sony locally has confirmed for us yet. It’s probably going to be at the same level of or more expensive than the original Z Tablet but you need to ask yourself: is that too much to ask for a speedy 10.1-inch slate that won’t die if you use it to watch movies in the bath?