Child of Light – Yes, this is a fairy tale Child of Light is a turn-based role-playing game from the same minds that bought the world Far Cry 3 and they couldn’t have gone in a more different direction from their previous work. Child of Light is built on the same gaming engine that powers Ubi’s Rayman Legends but the end result isn’t quite as cheerful as the bonkers adventures of Rayman and friends. That’s not necessarily a bad thing as Child of Light is a much more sombre, though addictive and charming, experience overall.

The story is a fairy tale, in the older sense of the term. It’s not all cheerful princesses and bumbling villains. Instead, players will take on the role of Aurora, a little girl who dies in the real world and winds up in the world of Lemuria, where she is tasked with saving all of the inhabitants from darkness – hence the title of the game. She’s helped on her journey by a little blue firefly called Igniculus – who acts as an extension of the player and performs a specific function in battle. Just what happens after the initial premise is something that players of this downloadable Xbox 360 (and other platforms) title will have to discover for themselves. We’ve never been keen on spoilers and Child of Light features a storyline that has to be experienced. We will describe the narrative in a single word though: enchanting. Plus, the developers have made all of the dialogue rhyme. 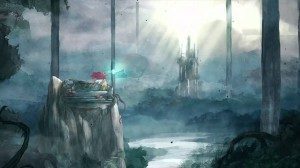 Gameplay takes elements from several different game types to create the whole experience, with platforming coming courtesy of Ubi’s Rayman games. Also taking cues from Rayman is the setting, though it’s a darker painting overall. Players, as Aurora, will quickly gain the ability to fly, something that changes the game considerably by taking advantage of level verticality but the basic platforming mechanics still stay in place.

Combat is very different, being a turn-based affair that calls for some quick thinking. Players will never encounter more than three enemies at a time but actually getting your attacks in, while easy at the outset, will take some creative planning. In extreme battles players will be outnumbered, since only two attacking party members (of which there are several to choose from) can be present at one time – plus Igniculus who can slow down enemies and heal player-controlled fighters. Elemental strengths and weaknesses need to be accounted for in battle – attacking a fire creature with a flame-effect attack won’t do a whole lot of damage. At the same time, players need to make sure that they’re resistant to elemental effects themselves. 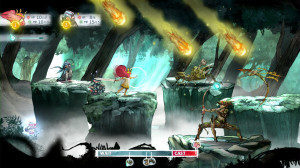 This is done with the gem or Oculus system, which has players assigning gems to party members. Some of these gems can be combined, to create other varieties (like diamonds) or improved versions of the base precious stones to use with party members. Any gem can be assigned into one of three slots, changing its effect according to where it is placed. A ruby, for instance, can alternate between adding flame damage to adding flame resistance to a player, while in the third slot it will bump up their HP total. Picking which person gets which gem is almost as important as controlling playable characters in battle.

Unfortunately, the depth described here is about as deep as the game gets. It’s effective for a few hours but it will eventually become repetitive. The storyline is enough to carry Child of Light through this eventuality however but gameplay doesn’t really evolve beyond what is seem in the game’s opening minutes. That can be seen as a negative but you’ll probably keep playing regardless, if only to see the next hand-painted part of the world.

For a semi-artistic, thoughtful tale, gameplay is mostly engaging and the characters and settings that players will encounter throughout their journey in Lemuria are only enhanced by the music that Ubisoft have opted for in Child of Light. The result is a very charming voyage that, while giving the visual impression that it is for kids, will charm adult players. In fact, letting the kiddies play Child of Light might result in a spot of psychological scarring. But you will want to see how the story turns out and whether little Aurora gets her fairy-tale ending.