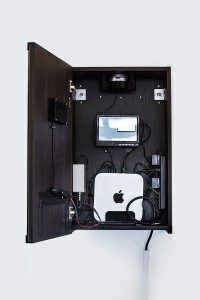 If this had pitched up earlier this month we would have discarded it as a clever April Fool’s prank but it seems to be the real thing. A design company called iStrategyLabs has come up with a mirror, called the S.E.L.F.I.E. (Self Enhancing Live Feed Image Engine), that will do exactly what it says on the tin: take selfie images when users look into it and smile.

The mirror is an experiment more than anything else but The Verge reports that you can get your hands on one by contacting iStrategyLabs. The company has used a Mac Mini, webcam and some LEDS, controlled by Arduino processors, to create the selfie-taking mirror. The location that users need to stand for an optimum shot is marked on the floor by a vinyl sticker, the camera itself is smile-activated thanks to facial recognition software and once the image has been taken, the S.E.L.F.I.E. posts the image to Twitter.

In order to get that shot just right, the LEDs that are embedded in the mirror function as a countdown for when the image will be taken.