Is this thing even on? It can be a little hard to tell whether Huawei’s newest MiFi (Mobile WiFi) box is functioning unless you’re peering really closely at the power button or keeping an eye on the connection status of you computer or mobile device but that’s really a part of its charm. The E5730 is an upgrade on Huawei’s previous efforts along these lines but from the outside it just looks like a little white rectangle. Add in a data SIM card and an emergency and you’ll find it turning into the best friend you’ve ever had. Best friend in a box, anyway. 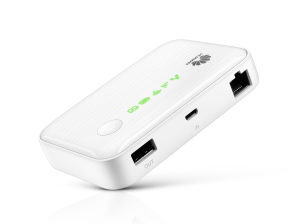 Huawei’s E5730 is just a small box with a plastic outer shell that nonetheless looks and feels like a quality product. We wouldn’t like the chances of the top or bottom plates if something were to hit them at any kind of velocity, they’re something like Samsung’s smartphones in that respect, but it’s a minimalist look overall. There’s only one button on the top of this little wireless modem, with a collection of ports in the rear. Also on the top of the device is a bank of status LEDs that are invisible unless they are trying to tell you something or if the E5730 is booting up.

At the back there’s a micro-USB port marked IN, for charging the E5730, a full-sized USB port marked OUT, for using the embedded 5,200mAh battery to charge a mobile device that might be in danger, and then a standard ethernet port. A fairly simple setup but it’s also very versatile at the same time.

The MiFi is able to connect ten different devices to the internet at the same time, something that was attempted when the Stuff offices had a bit of an internet loss earlier this week. Once the E5730 has been set up, either using an internet browser in the same manner as a traditional ADSL router or with a smartphone app, devices can easily be connected by just locating the portable WiFi network, entering the password and starting to use the internet. Actual setup was minimal, we just picked a WiFi password and we were off.

It’s quite platform friendly as well. Windows, Mac, Android, iOS, everything will just connect with the right credentials. Even a 3DS we had lying around spent a little time online thanks to the E5730. Users have the option to connect a standard desktop PC to the MiFi as well, via the ethernet port, and this also works as though there was a proper internet line connected to the machine.

That said, the E5730 is subject to a few flaws. The browser-based interface is fairly useful but we were using a Cell C SIM card cribbed from one of the company’s (Huawei-made) Speed Stick 3G dongles. There is a way to get the MiFi to send SMS but we were unable to access any kind of dialler, a must when attempting to convert pre-paid airtime into data. This led to swapping between the E5730 and the Speed Stick. Of course, this isn’t a problem if you’re able to load data directly onto the inserted SIM card.

The interface isn’t all bad though. Users can set limits on the E5730 itself if they’re on a strict data plan and don’t want to go out of bundle, a process that is as simple and easy as clicking a tab in the browser-based interface. Users can also check for firmware updates and use a selection of wizards to set up the MiFi through the same interface and Huawei have made both of those options equally easy to use.

The E5730 is a bit like a shotgun. If you don’t need it, it’s not a big deal but in the event of a zombie apocalypse, you’ll be awfully glad that you have one on hand. It might be subject to the same vagaries as the average cellular phone when it comes to signal but it’ll breathe life into up to 10 devices with at least one of them not requiring any kind of WiFi connection, charge an ailing smartphone or tablet and it’s small enough to fit in the palm of your hand. Okay, so it’s nothing like a shotgun then, we’ve never seen one of those with an ethernet port.