InFamous: Second Son is the third outing for the InFamous series that initially introduced players to Cole McGrath, the karmic chameleon that was the protagonist and occasional anti-hero of the first two titles. Second Son is a canon look at after the events of the second game, if you describe ‘canon’ as what the majority of gamers opted for at the close of play in Infamous 2. 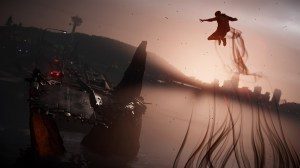 This time around we’re taking on the role of someone a bit younger in Delsin, the accidental Conduit and part-time misfit who sets out for Seattle in search of a way to help his people, the Akomish tribe. The close-knit community is horribly injured thanks to several Conduits who manage to stage a jail-break nearby, though the escaped Conduits don’t do any of the damage themselves. That is caused by the military forces in search of them and Delsin sets out to set things right.

Our hero (depending on how you play him) is the Peter Petrelli of the InFamous world. He seems to be a Conduit but without any active abilities of his own. Coming into contact with another Prime Conduit (one that has their abilities conferred naturally – more or less) sees a transfer of abilities taking place and gives players their first skill – Smoke. Throughout the game players will come into contact with other Conduits, absorbing their abilities as well. There are two more main skills, those of Neon and Video, in addition to Smoke as well as a fourth power that crops up during the massive final boss battle that feels just a little hurried but players will spend most of their time swapping between the trio of skills before the final showdown – where they will be forced into using mostly Smoke. But just what will players be dealing with in terms of combat and movement? All of the abilities are extremely well balanced, both in terms of movement and combat. Smoke lets players transition through fences and air vents, become ethereal (more or less), and fire cinder missiles of varying sizes at enemies. Neon is designed a little differently, focusing on speed and precision combat while letting players run up walls. Neon, which is charged up by draining neon signs, is for the player who favours a sniper over an assault rifle in first-person shooters. Video is, to put it bluntly, the power of video games. It’s a more stealthy skill set, which makes use of invisibility and distraction, as well as the power of flight to get players where they need to go. In terms of offensive combat, players can launch large swords at enemies or hit them with a stream of… pixels?

Each ability comes with a single major attack that is charged by karmic actions – depending on whether players are being a nice guy or a massive douche, the requirements to charge up these large area-of-effect strikes change. Playing evil requires that players kill as many people as possible in a set span of time. It doesn’t matter who. Enemies, bystanders, they’re all just targets. If you’re playing good, subduing enemies, helping passers-by and generally being helpful over time will get that massive strike ready. Killing anyone, however, will lose you that streak. Players will find that their skills will be slowly improved throughout the course of story events, which are at odds with the open-world nature of play. Seattle is an open area that players are able to explore at will but activities, aside from generalised mayhem initiated by players and the clearing of central enemy-manned checkpoints, are thin on the ground. Good players can disrupt drug deals, evil players can beat up on protestors but the rest of the day’s activities involve tagging walls with paint, locating cameras and searching out spies. The world feels rather bland outside of the narrative. Which isn’t ideal but the storyline makes up for it.

Whichever karmic option players take, they’ll find themselves with Delsin the whole way. There are a couple of actual decisions that players have to make that can swing the moral compass one way or the other, influencing missions and character development on the way. It’ll also have an influence on how other characters develop as well as the end-game – just like previous instalments. This PlayStation 4 exclusive makes use of the PS4 controller’s touchpad to interact with much of the world, specifically when absorbing smoke, neon or video streams. The motion controller’s six-axis functions also come into play when using it as a spray-can for a little on-the-spot interactive graffiti. As for the PS4’s improved hardware, the visuals, particle, smoke and lighting effects speak for themselves. Second Son is undoubtedly the prettiest game in the series. It’s also a little less than previous outings where, though it’s still good fun all round.