Castlevania: Lords of Shadow 2 is one of those games that should start with a questionnaire asking whether players have gotten around to finishing the first game in the series. That is because players will have the ultimate fate of the protagonist of the previous game, Gabriel Belmont, spoiled immediately upon starting up Lords of Shadows 2. If you are one of those people who just never finished the last title and you’re keen on surprises, do not highlight the text that follows: Players will be reprising the role of Gabriel Belmont, who succeeded in his quest to rid the world of the Lords of Darkness. However, in doing so, he was also cursed to take their places as the dragon (that’s Dracula to you and me). The game opens with a very annoyed army battering down the doors to Dracula’s castle and players unleash the full might of the Prince of Darkness upon their very unsuspecting hides. This initial section, which serves as a tutorial as well as one hell of an opening sequence, will give players a taste of the abilities that will be at their command at the close of play before whisking them away. Not unfairly though, Lords of Shadow 2 actually explains the reason for Dracula’s decline quite nicely. We’re going to skip over the remainder of the events in the game with just the overall objective in sight. Dracula (in the form of Gabriel Belmont) has been resurrected with one aim in mind. To combat Satan, who has his sights set on the world. And this is the real, nasty, very annoyed Lucifer, with large numbers of followers and a host of minions that are intent on opposing the player.

Players will prevent the threat of Satan’s arrival through combat, some stealth sections, a collection of cutscenes and the odd puzzle – either movement- or brain-based. Lords of Shadows 2 has both available. There are also two distinct settings that players can switch between at certain points, either to backtrack over old areas as new abilities become available or to harvest upgrades in preparation for a particularly tough encounter. 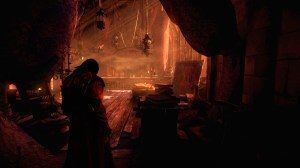 Both of the game’s settings are suitable for their locations, though spending time inside Dracula’s castle is arguably the more… colourful experience. The challenges that players will face are spread between both areas though and players will have their skills tested. Not to the extent that the first game challenged players on a combat level though, some of the early boss fights from the first Lords of Shadows are tougher than the late-stage encounters in the sequel. Still, mastery of the perfect parry, dodge and effective use of the magic-based Void Sword and Chaos Claws are essential for surviving through to the game’s conclusion. 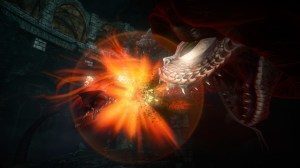 The stealth sections of the game are, unfortunately, not optional. They’re not as much of a chore as you’d think but they slow the pace of the game down as players are forced to find a way around hulking enemies that can kill them in moments in a head-on confrontation. Some of these areas make sense, others just seem to be in place to break up sections of combat without putting a locked door in your way.

Castlevania: Lords of Shadow 2 features a storyline that can come across as stilted but playing through the game sees the story and characters grow on the player, with a surprisingly large jump taking place between not caring and being quite invested in the events that are taking place. It won’t be like this for everyone, of course, but persevering though Lords of Shadows 2‘s early sections will result in the experience improving considerably.

As sequels go, Lords of Shadow 2 isn’t a bad outing at all. There’s plenty of tie-in with the first title while there is enough different to make sure that it doesn’t feel like a rehash of what came before. Konami have also left some space for DLC, some of which has already been announced, and we’re certain that there will be more on the way. At the end of the day, you’re playing as Dracula. That should be enough to sell anyone on the game, really.