Here’s something that we were aware of but hadn’t really seen up till now – an HDMI dongle that confers Smart TV-like qualities on a less-than-intelligent one by using the power of Android. And something called an Air Mouse. The Piko, as it is called, is basically an Android operating system on a stick with a collection of pre-installed apps that can be controlled from the couch with the aforementioned Air Mouse. This device comes by way of a company operating out of Durban called Maslow, making it a bit of a home-brewed piece of gadgetry.

The Piko ships with the HDMI dongle that connects to your TV, as well as power adapters if your television set doesn’t happen to have a spare USB port handy, an HDMI extender, a four-port USB hub for connecting to the Piko, the Air Mouse (plus batteries), an SD-card adapter for transferring content onto the Piko’s 2GB microSD card from another USB-supporting device and the cabling needed to get everything to get up and go. 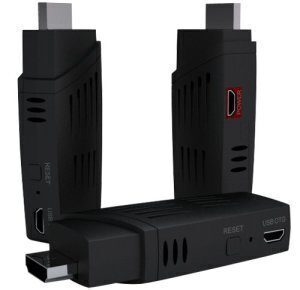 Maslow told us that the Piko runs Android 4.0.4 and its product specifications say that the device has either 4GB or 8GB of internal storage available. We were unable to check the Android version as the option for viewing it had been removed but the test device we were sent had 1GB of internal storage (about 600MB available) and a further 2GB facilitated by a microSD card. There’s also a 1.2GHz quad-core processor involved and the dongle has 802.11 b/g/n WiFi integrated into the unit.

The pre-installed apps are all that the Piko really consists of, besides the operating system, and almost all of these are free versions of larger applications available from Google’s Play Store. Fruit Ninja and Angry Birds are present for entertainment, Kingston Office is is present for Microsoft-y tasks and there’s also the standard run of YouTube, Facebook, Twitter and Skype offerings to play with. There are two free versions of fitness app, as well as News24 and SuperSport’s own apps, pre-installed. Google’s Play Store does leave a lot of room for customisation and experimentation with the device though.

Piko features, on paper, almost everything that you could want from a device designed to turn your stupid TV into a smart TV but for its price (it retails for a little under R1200), you might be expecting a bit more from it. Part of the reasoning behind this is that you can build something extremely similar for about half the price from a Raspberry Pi setup (or make a small robot or a flying camera or something) if you have the time and patience. With more or less the same apps installed no less, since you’d be able to use Android as an OS if you’re feeling really patient – plus you could make the Raspberry Pi’s camera function at the same time. But that’s not the major problem here.

Though the initial setup is easy enough to achieve, users are probably going to experience a few problems actually using the Piko for anything more complicated than browsing YouTube or the internet, and even the latter presents its problems. The Air Mouse that is included with Piko is easy enough to use in most cases, being a combination of a computer mouse and a television remote control (a lot like a particularly unforgiving Wii Remote, really). Using it to type, however, is a massive pain in the rear end due to sensitivity issues which require that you hold it dead still when selecting a letter from the on-screen keyboard. This isn’t always easy. This can be alleviated somewhat by attaching an Android-compatible wireless keyboard to the Piko via the USB hub but at this point you have to be thinking of just splurging on an HTPC instead.

Media playback is another sticking point. Media that plays perfectly well via an Xbox 360, PS3 or even the connected media PC we had handy presented the Piko with some streaming trouble, even though all four devices were about the same distance from the WiFi access point used. The default media player also had trouble downscaling audio from files with a 5.1 soundtrack to something that would output in stereo (it couldn’t do it, in other words) and some media files it just flat rejected. It doesn’t do this with all streaming media but not having wider codec support is irritating. It is a chore to figure out how to stream over a home network, though it isn’t impossible to do with a little prodding and it’s easier than manually transferring whatever you want to watch that day onto a microSD. Anyone with minimal Android experience will feel a little lost at times but most of these issues can be corrected by spending some time updating and replacing apps using the Play Store.

Piko is aimed at TVs that are new enough to support HDMI but not intelligent enough to give actual Smart TVs a run for their money. There is a market there but at present the Piko doesn’t do much out of the box that cannot already be achieved by connecting a video-game console to the internet. In its favour is the fact that you are able to outfit it with whichever app the Google Play Store has to offer but if you’ve got a connected console or a home theatre PC, Piko will hold little attraction. A custom-designed app or two to make life simpler would go far towards making us feel like we hadn’t just connected an under-served smartphone to a TV. In other words, there’s potential here but Piko hasn’t realised it yet.