Tomb Raider: Definitive Edition (PS4) – A reboot gets a reboot Doing the review of Tomb Raider: Definitive Edition for the PlayStation 4 was rougher than game reviews, even of bad games, usually are. That’s because of the visual improvements that have been put in place for this release. In order to properly gauge just how different the PlayStation 4’s version of Tomb Raider is from the last generation, much of this review was done by swapping between games running on two different consoles. The PlayStation 4 was used to look at the Definitive Edition while the Xbox 360 was used to see how things used to be. Because that’s what we had available. And switching between the two games in two to five minute bursts can get a little tiring.

Still, the review was finished and this is what we have. If you played last year’s Tomb Raider reboot then you know exactly what to expect from the story and gameplay. If anything was changed there we were unable to see it and that means players will be roaming around the lost kingdom of Yamatai following the young Miss Lara Croft’s unfortunate shipwreck, alternately surviving a range of very brutal challenges or exploring for relics and clues about why the island is the way it is. The game’s storyline is still just as phenomenal as it was the first time around and enough time has passed for the experience to feel almost new. However, with regards to the single player side of the game, you won’t be hauling it out for a replay any time soon after you’re done. While you’re in it the first (or second, if you got it earlier) time around, you’ll almost live and breathe Lara’s genesis. That means hunting animals, killing enemy soldiers and just general enemies by stealthy or in-your-face-with-a-shotgun means, and traversing the landscape vertically with the help of a climbing axe and perhaps a flaming torch. With a fair helping of ‘will she make it?’ thrown in, even if you know the answer already.

A pleasant bonus for the Definitive Edition, quite aside from the visual upgrade which we will get to in a moment, is that all of the downloadable content that was released for the game has been included for this release. That means all of Lara’s extra outfits, that new tomb and a whole bunch of multiplayer goodies are yours to play with. 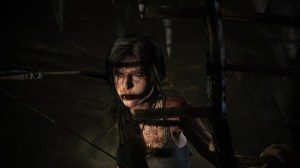 But that’s not why we’re really here. It’s the visual updates that drive home just how far removed the new consoles are from the last generation. Everything, and for once this is meant literally, looks better than it used to. The character model for Lara Croft has been extensively updated and she looks a little… blobby in the Xbox 360 version of the game once you’ve seen the sharp, defined features in the update. Her hair has been remodeled and there’s a lot more movement apparent when players are moving around, something that has been extended to the game’s cut-scenes.

But it’s not just character models, though all of those seen in-game have made their appointments with the touch-up artist at some point. Water effects are more watery, in that the oceans, rivers, waterfalls and rain all behave closer to their real-life counterparts. There’s been an improvement in the game’s cloth physics, which sees random rags waving in the wind more realistically and clothing looks better as well. It seems to rumple in all the right places or just clings when wet. World detail has also been overhauled. General surrounds are sharper in general and objects stand out in a way that they just didn’t in the last-gen versions of Tomb Raider (and we thought that looked pretty darned good when it launched). Fog, dust and other diaphanous occurrences seem more lifelike, especially when a breeze wafts the particles past the player’s line of sight and other details have been added. Heat haze from candles and flames have been added, dirt, muck and blood on Lara’s body looks much better and vastly improved lighting across the board is in evidence. You could almost be watching a movie.

There is another feature added that doesn’t have anything to do with the visuals. Voice control can be used, to pause the game, bring up the map or switch weapons. Unfortunately we don’t have the peripherals to make use of this particular addition but by all accounts it suffers from oversensitivity. Not a good thing in a cinematic adventure like this Tomb Raider reboot.

Is Tomb Raider: Definitive Edition the best-looking version on the market? Hell, yes. Should you play it on the new consoles. Again, hell yes. But, even with the visual upgrades and the DLC content that the Definitive Edition offers, if you’re the sort who plays games once and then never again then Tomb Raider DE doesn’t offer anything that is really new. But, at the very least, you need to check it out. And then scold your old console for not looking nearly as good as this does.