Parrot AR.Drone 2.0 Power Edition – There’s something in the air…

Stuff Magazine does not live on some isolated technology Utopia, surrounded by nothing by the latest and greatest in tech and the best takeaway delivery service ever created (more’s the pity). Stuff shares a communal area with a few other companies and it’s times like these that people are convinced that all we do all day is mess around with toys. Well, we do but that’s no all we do.

We got our hands on Parrot’s AR.Drone 2.0 Power Edition for review and, following a few false starts and the general demolishing of our interior areas, were sent outside to play with it where the damage wouldn’t be so expensive. Or painful. Seriously, sorry about that. You know who you are.

But the minor knocks that Parrot’s drone has taken while in our care have gone a long way to substantiating Parrot’s claim that the hull is very durable. There is an indoor and outdoor version of the hull available, the indoor hull protects the propellors from bouncing off vases, walls and errant ad sales executives. Very handy. Actually controlling the AR.Drone 2.0 Power Edition calls for an app, AR.FreeFlight, that needs to be installed on a smartphone or a tablet. This review was done using an LG G2 but it seems that an iPad and the iOS version of the app will give you access to Director Mode, something that isn’t yet available on Android.

Once that is all done, the drone is ready to be flown. It takes a bit of practise to get the hang of the smartphone controls but there is a twin-stick touchscreen control setup for those uncomfortable with using a mobile device’s accelerometers to do the steering. We’re nowhere near the proficiency that practised drone operators are capable of but we managed to fly the Parrot through a series of obstacles and even execute a flip or two by the time the first of the two included batteries was depleted. 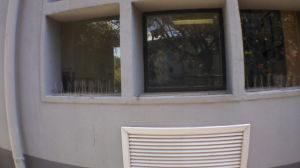 That’s why this is the Power Edition, by the way. Parrot are very aware that users will only have about 15 minutes (or less) of flying time per charge and they’ve included a second battery for this particular package. Users are still looking at pizza delivery times when using the AR.Drone 2.0 (30 minutes or less) but that’s still double the time that was previously possible.

But why would you want a drone at all? After spending a few sessions in the company of the Parrot, it would be a better question to ask why wouldn’t you. Just flying it around is an entertaining experience but there’s also the possibility of 720p video and photo capture, thanks to the included wide-angle camera (which we used to do a spot of spying around the office). Images and videos are saved directly to whichever device you’re using as a controller so if you ever lose the drone, you’ll know exactly how it happened. This little quadrocopter is held aloft by four brushless motors, that reach an insane 28,500 rpm when it’s just sitting there looking at you. The Power Edition comes with interchangeable blades, which are great for personalising the craft or (ahem) replacing some that have met with an unfortunate end. The whole setup is controlled by a 1GHz ARM Cortex A8 processor and there is an accelerometer, gyroscope, magnetometer and pressure sensor in the craft itself that all pull their weight in making your flight a stable one. Except in a breeze, the Parrot isn’t that impressed with wind-shear.

High winds were the reason we couldn’t take the drone up it its full 100 metre height, since we were uncomfortable with the traffic accident potential if it was knocked off course. The best place to use the Parrot is a very large and, most importantly, unoccupied field.

Parrot’s AR.Drone 2.0 Power Edition really is a toy. An expensive toy. But it’s also an awesome toy and if you’re not looking to spend the kind of money that something like this costs, please don’t ever actually try one out. Because it’ll be coming home with you, where you can spy on neighbours and terrify house pets for 15 minutes at a time. If you’re feeling a bit more professional, the Parrot can also be employed for serious work. Just use your imagination on that one.

Below you can see one of our test-flights recording with the drone, recorded in a fairly cramped area and with a bit of a breeze blowing. There is at least one crash present in the clip where, cat-like, the Parrot landed on its feet and was up and running again in moments.