Perhaps you’re familiar with the Naruto anime franchise, which is one of the most watched series in the Western world. Perhaps you aren’t, but that shouldn’t matter too much. Of course it helps to have some background on the antics of the village of ninja and Naruto himself but (okay, deep breath) Naruto Shippuden: Ultimate Ninja Storm 3 – Full Burst doesn’t mind if you’re not that experienced in the arts of Ninjutsu.

Before we continue however, you do need to know that Naruto – Full Burst isn’t actually a new game. The lion’s share of the content was released as Ultimate Ninja Storm 3 in 2013, making the game almost a year old. So what has changed in the intervening time to make publisher Bandai Namco reissue this title? 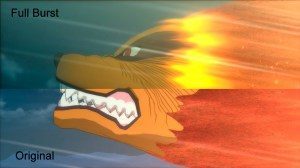 As far as the main game goes, not a whole lot. There has been a visual upgrade across the board but the story-based Ultimate Adventure mode is largely unchanged. It’s still a very cinematic take on the Naruto series, with a selection of colossal boss battles intersperse with challenging fights involving the many, many characters in the TV show. Full Burst still may have one of the largest rosters we’ve ever seen in a fighting game and this is made even larger (kinda) by the inclusion of all of the downloadable content that has been released for the game to date.

That means everything from swimsuits for the teenaged female ninja to battle in to funny hats and other weird additions will be available to players. The changes are cosmetic only but they make for a slight change of pace when it comes to online fights. 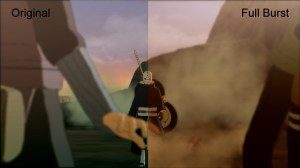 There is a whole new chapter involving characters Itachi and Sasuke Uchiha facing off against Sage Kabuto to cap the game off. Explaining why this is important would take more space than we’re allowed and it’s not canon anyway but it will try player’s patience in a big way. There are also an additional 100 Challenges that have been added to the game in the Challenge Mode, if you’d like to extend your gameplay even further than the post-story RPG section that turns up.

The new stuff is great and all but if you already purchased the base game last year, there isn’t really enough available to make you want to pick up a second copy – even if you opted to skip all of the DLC completely. The changes and updates do make for a fuller, better game but it isn’t different enough to justify the additional expense. On the other hand, if you missed Naruto Shippuden: Ultimate Ninja Storm 3 the first time around, then this is the edition to get. The cinematic fights in the single player mode, courtesy of CyberConnect2, are enough to bring a tear to the eye of even the most ardent Naruto fan and there’s so much gameplay in the various offline modes that you could play for days before even considering taking your skills online against some human opponents. Completing all of the paths and objectives in the Ultimate Adventure mode will take some doing, finishing the post-story stuff will take even longer.

Then there are the challenges, survival matches and finally online, with the option of a quick couch bout in between to keep your blood up, all with series-appropriate animation, voices, attacks and presentation.

The sad part of all this available content is that if you’re enough of a fan of the series to find Full Burst attractive, you probably already purchased the game the first time around. But if you somehow passed it over, now would be a very good time to correct that oversight.