Thief is a video game series with a history, as well as a collection of fans that fondly remember the original releases that started back in 1998. The original Thief trilogy is no easy act to follow, especially when the game’s lead character Garrett has been dormant for a decade. Square Enix and Eidos Montreal are planning on giving it a good shot, with the Thief reboot releasing at the end of February. The big question is: will long-time fans be disappointed and will newcomers feel welcome. In short, can Eidos Montreal make everyone happy?

Stuff was given the opportunity to partially answer these questions at a recent preview event, a hands-off look at the combat and gameplay mechanics followed by a live demonstration of  Thief running on a PC. So did Thief manage to steal our hearts or was Garrett incarcerated in the soon-to-be-bargain bin? 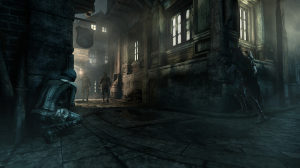 Thief‘s reboot is staking its appeal on appealing to modern gamers, first and foremost. Control of Garrett will be smooth, with some gadget-assisted movement to elevated areas defining the outdoors experience. Stealth is still the name of the game, though there are several different approaches that will be open to players. An action-oriented tack can be taken, where players are able to eliminate opposition from the shadows but those who played the Thief titles of yore will find that pure stealth is still an option (and may be the preferred way to play – maybe we’re just old). Garrett will find himself somewhat of an unwilling hero to the downtrodden people that populate the open world he finds himself in. Following a somewhat depressing reunion in the game’s opening sequence – one which also serves as a well-planned tutorial section – Garrett is given a special ability or two, as well as some interesting gear that allows him to be a more effective thief.

Parts of gameplay will be familiar to well-rounded gamers. Garrett has a new vision mode that given him hints as to what options there are in the environment, a heavy feature in recent Square Enix games. Traditional weapons based around Garrett’s upgradable bow are also in evidence, like the water arrow, but players will find themselves using some very unusual bow-based gear later in the game – either for distraction or offensive purposes. Visually, Thief looks as though it is going to be top-notch. The live preview showed that there was still some work to be done with regards to animation, with the odd bit of screen tearing that was likely the fault of the massive display we were watching the game on. As with all previews, the section seen was a snapshot of much earlier work and we’d be massively surprised if the minor issues seen haven’t been ironed out already.

And then there is the storyline, which we really don’t want to spoil. The small bit we’ve seen will see Garrett wracked with guilt over his actions that, while correct for the time, have lead to a friend being killed. The initial sections of the game will likely come into play at the endgame but there’s also a nasty Baron, a whole collection of pissed-off citizens and a lot of loot to take with you to look forward to. Thief seems to be on track to keep absolutely everyone in high, light-fingered spirits.