DStv has announced the rollout of new features for their Explora handheld units via a software update that will be launching for the devices this week. The update will make changes to DStv Catch-Up and on-screen filters, add support for a Kids genre, refine searches using keywords and will allow users to see episode and season numbers when they have a series in a playlist.

Other changes to the software on a given DStv Explora have also been detailed by MultiChoice. The upgrade will be automatic, according to the company, once the software update launches.

Below is what you can expect from the update in detail, via MultiChoice.

Series Content stacking is a new way of showcasing Series in the CatchUp menu screen. Instead of episodes of a series, where each has its own poster art being displayed separately, they will now be stacked one behind the other in a way that shows how many episodes are on offer. By highlighting the series and pressing OK, information on all the episodes in the stack becomes available to the viewer. Current software: When you press the Catch Up button on the remote, you are presented with the following options: Just Added, Movies, Series, Sport, Other Shows, All (If you select one of these genres, it will bring up titles within that selection). Current software:  Kid’s programs are currently in the “Other Shows” genre folder.

New software:  Kid’s content is now individually grouped, which includes series stackingYou will find Kids by pressing the Blue DStv button on the remote, then scrolling right till Kids is highlighted.

The following sub genres will be available in Kids: All, Just added, Animation/Cartoon, Series, Action, Other, Entertainment. Current software: What appears on the 1st line, and Text is on the second.

In the ‘What’ selection (Title/Synopsis/Title and Synopsis) options never produced different results. This has now been enhanced to provide more accurate results.

Display of episode and season numbers in playlist

Current software: At present the season number is presented without the episode number on your playlist and schedules list.

New software: With the new software the season and episode numbers are available. 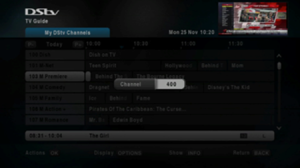 Current software: if you bring up the TV Guide grid (by pressing the TV Guide button on the remote) – to scroll to another channel, you have to use the Top or Bottom arrow keys, which may not be user friendly especially if you want to scroll from eg: CH 306 to CH 103.

New software: In the TV Guide you can simply type in the number of the channel you want to go to and press OK. If you type in a channel that is not on the grid (eg CH 102), it will automatically take you to the nearest channel, which is Channel 103. New software: Customers will now have 5 channel groups which can be personalized for everyone in the home (Mum, Dad, Kids). Each can be colour coded, so that it can be differentiated. By pressing OPTIONS on the remote, you are presented with the Display Options pop up, scroll to Channel group, All Channels, My DStv Channels, Channel group 1 (right up to channel group 5)   . Current software: Extended information layout is different in the TV Guide, Playlist, DStv CatchUp and BoxOffice. The different layouts are not easy to read.

New software: Extended information layouts are now consolidated and have the same view, and will be available in the LIVE TV environment, as well as the Playlist and DStv CatchUp. The information is structured for easy readability. Current software: Pressing the HELP button on the remote, brings up the Information Central screen.

New software: Pressing the HELP button on the remote, the following Pop up will appear.