Unconfirmed images have leaked which claim to show Sony’s “lens camera”. The lens camera from Sony was thought to be little more than a rumour and, as Digital Trends points out, the current crop of images could be a very clever hoax but website Sony Alpha Rumours has a lot of detail on what might be Sony’s next big announcement.

The images below show what iare thought to be Sony’s DSC-QX10 and DSC-QX100 lenses, which carry most of the innards that you’d expect from a digital camera. The lenses are designed to be controlled with a smartphone but reportedly have a sensor, Bionz processor, WiFi and NFC connectivity and space for an SD card. This would greatly increase the capabilities of the average smartphone if the rumours are true. At this point, it looks like they are. The lifestyle image is also thought to show Sony’s upcoming Honami i1 smartphone.

The larger of the two lenses, the QX100, apparently features a 20.2MP RX100MII sensor with a Carl Zeiss lens while the smaller QX10 has the same 18MP CMOS sensor seen in Sony’s WX150 CyberShot snapper. These details are unconfirmed at present but an announcement from Sony is expected on or around 4 September. 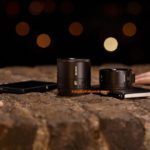 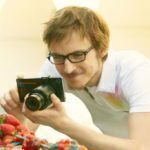