As the great prophets foretold many days ago, Apple has released updates to OS X, iOS and it’s Macbook range. There’s also a new radio service to iTunes and a nifty revamp of iWork to keep the angry mobs of iFans at bay. The ebbs and flows of California’s greatest export are settling into a predictable set of cyclic grooves. Like that bowl in your favourite leather recliner it’s best not to get too close, but to enjoy it for what it is.

Details will follow but here is a wrap-up of the new. 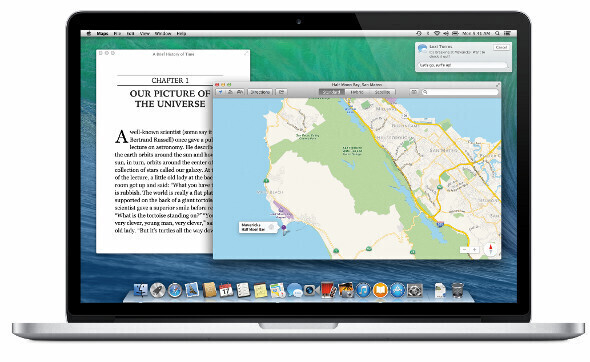 Gone are the cats, in are the California landmarks. OSX Starbucks cant be far off but for now you can expect a flatter, smoother more homogenous experience from the surf spot titled Mavericks. There are over 200 new features but most notable are the addition of Maps, iBooks, better searches and prolonged battery life. The Calendar is now time, weather and even traffic aware whilst Safari has been turbo’d.

Revamps to the iPhone software were more sweeping and the most dramatic since the original iPhone. The iron of Apple has made everything svelte and flat – more so than than OSX – with a huge amount of tweaking to core to coincide with the aesthetic changes. iTunes Radio and the new control center are vying for Siri’s update medals with the former offering 200 free stations tailored to your music penchants while the latter gives quick acces to commonly used settings and a torch. That’s right, we said a torch. There’s a new Air based on Intel’s swanky new Haswell chips. It should then come as no surprise then that performance is now a caveat of prioritised power efficiency. It’s all about battery so not much to see here.

There was a lot more excitement around the preview of the Pros. Towers are out, cylinders are so in. The new machines make PCs look Minecraft. Packing the new 12-core Intel Xeon E5 platform and 2.5x faster GPUs, RAM and flash storage, the new Pro’s are killer on paper and somehow stuffed into a 9-inch alabaster looking Star Wars dustbin.

Keep refreshing, the details are coming!