Samsung has added another two tablets to the Galaxy Tab 3 lineup, the 7-inch version of which was confirmed in April this year, in the form of 8-inch and 10.1-inch Galaxy Tab 3 models.

The Galaxy Tab 3 8-inch sports a 1.5GHz dual core processor, 1.5GB of RAM, the option of 16GB or 32GB of storage and support for up to another 32GB via microSD. It will ship with the usual swath of connectivity options with WiFi, 3G and LTE as standard and it will be running Android 4.2 Jelly Bean. It’ll feature 5 megapixel and 1.3 megapixel rear and front camera.

The Galaxy Tab 3 10.1-inch tablet, on the other hand, features similar specs but ups the CPU to a 1.6GHz dual core unit (said to be an Intel chip), strips down the RAM to 1GB and supports up to 64GB of extra microSD storage. Connectivity, the front camera and the OS are the same but the rear camera has been dropped to a 3 megapixel shooter.

The new hardware is expected to launch globally at the beginning of June, though a firm date has yet to be set. 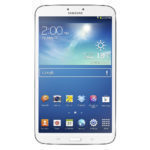