Samsung has brought two of its newest items to South African shores, the Galaxy Note II – with added Jelly Bean – which was launched during the Samsung World Tour event held yesterday at the Cape Town International Convention Centre and the Android 4.1-powered Galaxy Camera that has launched officially today.

The company’s Note II hasn’t exactly been flying under the radar but it has taken a little time for the 5.5″ HD Super AMOLED device to hit South Africa. It plays host to a larger, 1.6GHz quad-core CPU along with the 1,280 x 720 display. Among the features of the oversized handset are 3G and LTE connectivity options, support for most media formats (including .MKV), and of course the S Pen apps and functions. The S Pen has been improved overall, being made longer and thicker with a more comfortable design for the peripheral. Along with the physical redesign comes new features for the S Pen, chief being the Galaxy Note II’s reactions to it. Removing the S Pen from its holder automatically opens up the S Note app, while doing do while performing another action such as during a phone call will open the S Note app in  a pop-up window, allowing for multitasking with the device. As far as loss prevention goes, if the S Pen is left away from the device for too long it begins to vibrate, reminding the user to replace the Pen.

The S Pen allows several other functions, jotting down notes like a paper diary is possible as is sketching with the pressure-sensitive rubber tip, with the peripheral being able to switch between colours. It can also be used to crop and edit images and copy and paste text. The S Pen is also able to quick-launch or preview items with a gesture in the case of quick-launch or by hovering over an item. 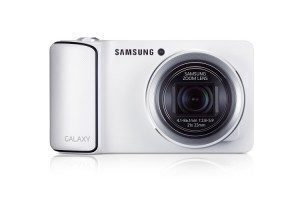 The other item from Samsung is something even more unusual than the Note II. Samsung’s newly released Galaxy Camera combines high-end photography with the Android platform by running the device on the same OS the Note II boasts: Android 4.1 Jelly Bean.

The Android is not alone however, the Galaxy Camera has a 16.3 megapixel 1/2.3″ BSI sensor with an F2.8, 23 mm lens in addition to a range of hardware that would not embarrass a smartphone. A 1.4GHz quad-core CPU, 4.77″ HD Super Clear Touch display and support for micro SDSC, micro SDHC, and micro SDXC storage expansion cards round out the internals, along with GPS, WiFi, and Bluetooth connectivity options. Thanks to Jelly Bean the Galaxy Camera can edit images as well as videos and the connection options allow users to upload images “…into the cloud via Samsung’s AllShare capabilities – the instant they are taken.” Sharing between the Galaxy range of devices from Samsung is also built in. A voice control option has also been included in the device.

Local pricing and availability for Samsung’s Galaxy Note II and Galaxy Camera were not immediately available.